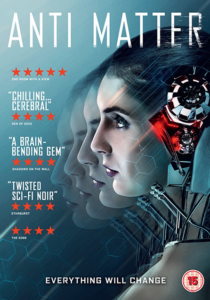 When Oxford based, American PHD student Ana (Yaiza Figueroa) discovers teleportation technology, she decides to test it on a human subject—herself. But passing through a wormhole leaves her a little empty. Faced with many haunting existential questions, she and her partners Liv (Philippa Carson) and Nate (Tom Barber-Duffy) must solve the mystery of what might have been left behind.

A swift combination of smarts, horror, and action, writer/director Keir Burrows’ clever science fiction indie starts like Shane Carruth’s award-winning 2004 film “Primer” but becomes its own unique take on the consequences of opening up black holes. Shortly after making the jump, Ana doesn’t feel right, and Burrows’ script gives us little details as we join her on her disorienting investigation. But not only is Ana unsettled, Liv and Nate are equally frustrated with the results of the human trials of their invention. Subtly things begin to stand out as awry. Protests outside her laboratory grow increasingly violent and certain players appear to be sinister. The mystery builds as another leap through the wormhole beckons.

In Ana, sexy lead Figueroa inhabits a unique character—an American Hispanic living in Oxford, England. Her conversations with her stateside mother, largely in Spanish, add special dimension to the troubled inventor, who, after passing through the wormhole, just can’t seem to find herself. Burrows smart writing makes maximum use of Ana’s past and her identity ironically crafting a fully realized character that we actually care about.

Pay close attention to little details. Ana, Liv, and Nate, all harbor a secret, but their uncertainty makes them keep things to themselves. “Anti Matter” is a surprisingly immersive mystery certainly on par with the Curruth’s intoxicating expositions on the efficacy of time travel in the cult favorite “Primer.” But where Carruth was constrained, some would say beautifully, by a minuscule budget, Burrows seems to have a little more to play with. It goes without saying that the advances in camera and editing technology since “Primer” enabled Burrows to do things that Carruth couldn’t, but Burrows’ film adds an action dimension that will broaden audience appeal.

There is no doubt that “Anti Matter” is clearly a humble production, with the writer/director Burrow’s wife, Dieudonnée Burrows, serving as producer. But as modest the budget must have been, the entire production breathes quality. Part of the credit has to go to the cast with Figueroa leading the way. A review of her filmography indicates that “Anti Matter” may be her first lead role in a feature, and she makes the most of it. I suspect that we will be seeing more of her in years to come.

Reminiscent of The Spierig Brothers’s excellent “Predestination” mixed with “Twelve Monkeys,” “Anti Matter” is a little film bound to capture the imagination and hearts of science fiction fans the world over. It’s a fantastical existential journey worth taking.

Look for “Anti Matter” in limited theatrical next week along with release on various streaming video on demand platforms.