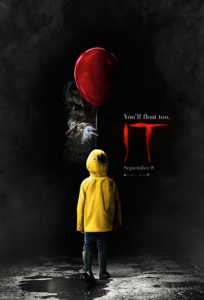 Fear can be healthy. It can also be irrational and deleterious. Knowing the difference takes experience and maturation.

The themes explored in “It,” the 2017 adaptation of Stephen King’s famous tome, centers on the process of respecting and over-coming fear. By focusing on children and their fantastical battle against a maniacal clown named Pennywise, maturation evolves on screen. And it’s a sight to be seen.

When Bill’s younger brother Georgie disappears during a rainstorm, no one is too surprised. In fact, such disappearances are common is the town of Derry, Maine. There’s much sadness, but people move on. Without spoiling the film’s terrifying opening sequence, the audience knows full well what happened to poor Georgie, and Bill (Jaeden Lieberher) refuses to give up hope that his kid brother will one day be found alive.

A year later, Bill and his friends deal with typical high school issues. Bullies are particularly problematic. Bill continues to search for his lost brother especially as missing flyers continue to stack up—stapled one on top of another. The new kid in town, Ben Hanscom (Jeremy Ray Taylor), has yet to be polluted by what can only be described as a form of town-wide psychosis. It is this odd reticence that permeates all community decisions. The exponential disappearance rate of the community’s children is dismissed as normal by the townsfolk.

But Ben digs deeper into the mystery, and that’s when Pennywise enters his life. Luckily for him, his fellow outcasts join his investigation. One such outcast is the bad girl named Beverly Marsh (Sophia Lillis). She’s got a reputation that follows her. And her life at home is even worse. The clan that eventually bands together to confront Pennywise also includes the foul-mouth Richie (“Stranger Things’” Finn Wolfhard), the homeschooled Mike (Chosen Jacobs), Stanley (Wyatt Oleff), who is struggling to satisfy his father’s religious edicts, and Eddie (Jack Dylan Grazer), whose mother has instilled in him a fear of getting sick that is truly unhealthy.

Familiar plot devices immediately become evident. And as an example, the cruel bully is nothing new in the Stephen King world. I’ve had a problem with such often wildly over-the-top characterizations that edge toward cliché. Sure, movies in general are highly stylized representations of reality, and sometimes the abusive bully provides the needed foil and even comic relief (see Biff from “Back to the Future”). But the evil bully can be an exploitive device that turns the story sour.

Fortunately, in “It” the concept of the evil and cruel bully is handled cleverly with thematic import. When the heroes of the film are terrorized by a band of roving older, abusive teens, there is a larger and more insidious force at work. Lost on no viewer is that the town of Derry is firmly caught in Pennywise’s manipulative and horrifying grasp. The clown is pulling the fear levers.

And oh what a clown we get. Pennywise, played effectively as I remember by Tim Curry in the 1990 television mini-series, is introduced here in the film’s opening sequence. He’s played by relative new-comer Bill Skarsgård. The performance, aided in no small way by the prosthetics that create the look of the scary dancing beast, remarkably works from the onset. Pennywise lives. The frightening creation is sure to be cemented in horror lore forever alongside other iconic cinematic creations such as Freddy Krueger, a detail that “It” is more than willing to embrace.

In an act of skillful oneupmanship, “It” makes a good case for an “R” rated “Stranger Things.” Both films feature a group of youngsters (perhaps, in some cases, pre-teens) battling the forces of evil. And both set the action in a small American town in the 1980s. But where “Stranger Things” explicitly adorned set design with winks and nods to the time period in a way that sometimes seems too on the nose, “It” manages to shape the environment in a more genuine manner.

Therefore, we get a downtown area where a movie theater on the square is showing “A Nightmare on Elm Street 5” and other less obvious references throughout. Having grown up in just such a town, my generation of viewers will be smiling wide. But unlike “Stranger Things,” which I admired and enjoyed watching with my children, “It” does not try as hard to broaden its audience artificially. Sure, references to the New Kids on the Block and even a funny homage to actress Molly Ringwald are dropped in in an effort to appeal directly for my eyeballs, but these lines of dialogue and visual cues seem organic in “It,” whereas, they seem placed more strategically in “Stranger Things.”

And proudly wearing the R rating, “It” makes magical use of foul language. “Stranger Things” veteran Finn Wolfhard, having survived season one of the Netflix hit, introduces an almost supernatural use of the prolific f-bomb. As Richie, Wolfhard, delivers the word with such rapidity and, frankly, innocence, that even George Carlin would blush. Richie’s crude and rude vocabulary is all four-letter words with the f-bomb being his constant go to. And by taking a page from the late great Lenny Bruce, the script, credited to three screenwriters, gloriously embraces the word with a kind of lusty guiltlessness that is unique. It marks a turning point in my distaste for placing such language in the mouths of young actors. Simply put, it works, and justifies the rating independent of anything else in the film.

To be fair, prior to the PG-13 rating, we saw movies rated PG that featured language and even nudity. These films spanned the 1980s and finally, culminated in a new rating designation in 1984, which was related to “Indiana Jones and the Temple of Doom” and Joe Dante’s classic “Gremlins.” Setting a movie in the 1980s without a character like Richie on display would be insincere. Our delicate 2017 sensibilities may be in for a shock as “It” reintroduces a dose of reality—children use foul words especially when they have no idea what such words even mean.

“It” is above all an exploration of fear. And fear appropriately drives the narrative and works its way deep into the viewer like few films of recent vintage.

Prior to our screening of the film, a taped clip with Stephen King was played for the audience. In the clip, he praised director Andy Muschietti and cheekily beckoned us to enjoy the movie if we can. I certainly did.