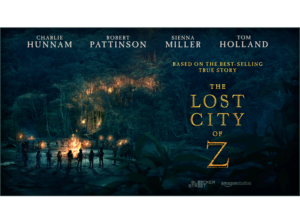 The Lost City of Z is well-written, superbly acted, and lovely to look at. Why, then, did I struggle to maintain any interest in it?

This biopic tells the story of British explorer Col. Percival

Fawcett and his lifelong obsession with finding a mythical city in the Amazonian rainforest. Fawcett ventures into this unmapped region multiple times, and eventually he and his eldest son disappear, never to be heard from again.

I’m not spoiling the ending there, by the way. Fawcett’s is a famous story that inspired Sir Arthur Conan Doyle’s The Lost World and many other fictional accounts, and the logline for the film gives away Fawcett’s fate.

So what is supposed to keep us watching until the end of a two-hour and twenty-minute movie? Not much, as it turns out.

James Gray, who earned critical praise for The Immigrant (2013), did a fine job of adapting the script from David Grann’s book of the same title. Charlie Hunnam and Sienna Miller both deliver their best performances yet, and Robert Pattinson is again barely recognizable and spot-on.

Sidenote: I need to stop being surprised by Pattinson. He is an outstanding actor who once upon a time made the mistake of accepting a lead role in a terrible franchise. He has more than proven himself since then, though.

The film is also beautifully photographed. Gray shot on film in the jungles of Colombia. He and cinematographer Darius Khondji, who also shot this year’s excellent Okja, captured stunning images of the landscape. The location shooting pays off in constantly authentic backdrops for the actors.

Ultimately, however, The Lost City of Z never made me care all that much about it.

The film constructs Fawcett’s quest, at first, as a means of restoring his family name. It seems his drunk of a father squandered the noble family’s fortune as well as its honor.

Fawcett is assigned the task of tracking a river to its source in order to map a clearly defined border between Brazil and Bolivia, which will help avert war between the two countries. He will thus regain his status in the eyes of the Royal Geographical Society and British aristocracy.

Fawcett is so determined to resurrect the family’s social standing that he leaves his wife, their young son, and his unborn child for what promises to be a years-long assignment.

This is the first of a handful of instances in which the film’s morality clashes with my own. Forgive me if I don’t think risking the possibility of making your wife a widow and children fatherless a way of reclaiming one’s social status.

I understand it was a different time and society, but I reacted to Fawcett the way I tend to react to Henry James’ characters: regardless of how elegantly the author writes them, these are people who put class and propriety above all else. I find it impossible to relate or sympathize. Nor did the story develop in ways that drew me in, despite the Jamesian social politics.

During Fawcett’s first journey, he discovers artifacts left by some ancient civilization. He instantly becomes fixated on finding this civilization, which he calls the Lost City of Z. He returns for additional expeditions, each time abandoning his growing family and going further into the jungle.

Fawcett’s pursuits are more Don Quixote than Candide. There are no philosophical questions given their proper exploration here, and even Fawcett’s motivations rooted in his father’s misdeeds are given only passing attention. His quest is just good old fashion hubris.

His wife, in what are Miller’s best scenes, even calls him out on this point. She is presented as a politically progressive, independent woman, yet she tolerates his leaving her alone with a growing family multiple times? It just doesn’t add up.

It is difficult, moreover, to sympathize with this quest because we know this era of exploration into the Amazonian rainforest has lead to its exploitation and decimation.

The film does earn at least mixed marks for its treatment of this topic, though, since part of Fawcett’s motivation is purportedly to discover the City of Z before others who are less respectful of the indigenous people and their way of life. But how will discovering it first stave off its exploitation? Again, this goes unexplained.

Fawcett also wishes to rewrite history and place his fellow Brits’ estimation of their society in proper perspective by proving that the people Europeans call savages are in fact civilized in their own ways.

Still, the film only briefly attempts to demonstrate Fawcett’s supposed respect. There are no indigenous primary characters, and aside from indications of a social structure and one scene in which Fawcett marvels at the peoples’ sophisticated agricultural methods, we don’t learn much at all about those indigenous characters. As the credits rolled, I couldn’t have named one indigenous character.

Outstanding execution and craftsmanship can often compensate for a weak concept, but not this time. The representations of indigenous people are more than a little troubling, and the central character just isn’t all that compelling. And when the film is a biopic, that means all is lost no matter how well the film is made.