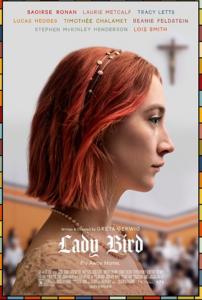 Any parent will be frustrated while watching “Lady Bird.” Awkward, searching high school students will immediately identify with the gangly, searching protagonist. And both parents and children should really like this authentic, if also uncomfortable, viewing experience.

“Lady Bird” taps into passion and fear on the edge of innocence.

By channeling her younger self, writer/director Greta Grewig finds her muse in Saoirse Ronan, who plays Christine “Lady Bird” McPherson. A high school senior, Christine gave herself the name Lady Bird as some sort of protest, perhaps to object to having been named Christine against her will. That protest started at birth.

Her mother, Marion (Laurie Metcalf), is an overworked psyche nurse trying desperately to hold it together. She’s simmering while her depressed husband, Larry (Tracy Letts), looks for work in a marketplace that values youth over experience.

Early on, we learn that her brother graduated from a good college with a degree but can’t find work possibly partially because he’s sporting a collection of facial piercings. It’s 2002, the world is in the throws of the early stages of the Afghanistan/Iraq wars following the 9/11. Nearing graduation, Lady Bird sees higher education as an escape—from Sacramento and from her mother.

Marion is the ultimate pragmatist. As the sole breadwinner for the family, she works continuously. And her work is never done. In addition to managing a revolving number of shifts, she cooks and cleans and runs an exacting household. At one point, she even asks whether Lady Bird requires two towels while showering. To her credit, Lady Bird respectfully says “no” and immediately coughs up her hair towel. It is a finely ordered, necessarily oppressive lifestyle.

In order to ensure that Lady Bird receives a good, safe education, her parents place her in a private Catholic school. The school is on the “other side of the tracks,” and Lady Bird lives on the poor side. Uncomfortable with her parents’ middle class origins, Lady Bird lies about where she lives. It’s not something that down deep inside she’s the least bit alright with. Lady Bird has been raised right.

The central conflict here is between mother and daughter. And it’s explored so genuinely that it cuts close to the bone. But that leads to the frustrating part.

For some reason, Lady Bird has to apply for financial aid and apply to out-of-state colleges with the secret help of her father concealing everything from her mother. The concern, apparently, is that Marion will blow her stack if she found out that her daughter wanted to go to a fine institution of higher learning in New York City. Frankly, this frustrated me. I suppose this mirrors Gerwig’s actual life experiences in some way, but most parents would be happy to see their daughter go to the school of the child’s dreams, especially if financial aid and scholarships would make paying for it possible. Trust me, I have a daughter and a son and teach at a university. Other flash-points, and there are many that could be examined, may have worked better.

What is enlightening is that this coming of age narrative treats sex and teens maturely. At one point, Marion and Larry frankly address whether their son and live-in girlfriend have sex on the family’s pull out couch. Laughing playfully, they understand the reality of being young and in love.

The narrative is undeniably sincere with winning performances all around. Ronan is terrific, reminding us of Ellen Page’s star-making turn in “Juno.” And much attention is justifiably being lauded on Metcalf, who is perfect as the controlling and well-meaning mother. The strength of the story lies primarily in the mother-daughter exchanges that are piercing and true. Emotions run hot and cold and their love and respect floats about like a third character. In one scene, the two shop in a thrift store and break in mid-argument to marvel at a dress. Later, we see Marion burning the midnight hour before a Singer sewing machine to alter the dress for her precocious child.

“Lady Bird” is a wonderful directing debut for Gerwig. And in Ronan, she may have found her perfect match. Hopefully, this relationship will continue with sincere stories of love and heartbreak.