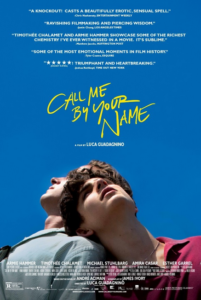 “Call Me By Your Name,” is one of this year’s most romantic films. It might also be one of the most controversial.

Set in 1983, the movie will undoubtedly make some viewers squirm not necessarily due the gay sexual content, but because the story involves a man engaged in an explicit affair with a 17-year-old. Still, there is a point in the film when you wonder whether the younger man is controlling the older one.

Elio (Timothée Chalamet) is a hip 17-year-old living with his highly educated and enlightened parents in rural Italy. It’s a beautiful place to spend the summer where love and lust form a confusing, intoxicating concoction. When his father’s research assistant, Oliver (Armie Hammer), visits, Elio is immediately curious. Of course, he sloughs off his initial feelings armoring himself with sarcasm and diving into an immediately physical relationship with a local girl. But, in time, the dangerous curiosity that plagues Elio turns into a mutual attraction, and he and Oliver become entangled in a torrid, private affair.

Can such an uneasy pairing flourish in that time, in that place, when everything and everyone are only temporary?

“Call Me By Your Name” is an adaptation by screenwriter James Ivory of André Aciman’s novel. The Oscar-nominated Ivory, whose work includes the similarly themed “Maurice” that found a theatrical re-release earlier this year, gets the power play between the man and the young man exactly right. Part of the magic of the film is seeing the moment when Oliver realizes that his younger lover might not be wholly into him. It is an uncertainty that flashes quickly over the more mature man humbling him enough to make him aloof and weakened substantially. Maybe this love or maybe just a momentary fascination.

Credit goes to Hammer. His Oliver is a striking, arrogant, fair-haired hunk capable of wooing and winning over most any target—male or female. But through subtlety Hammer manages to reveal doubt in his character. In one key scene, his irresistible wide, inviting smile tilts and sours as internal questions about his actions overtake him. I got the impression that Oliver wasn’t questioning his sexuality but wondering in that moment whether he would be capable of keeping the exciting Elio all to himself. These are the things older men think about, even when the older man is still under 30.

The sex is explicit here. Hammer and Chalamet don’t hold back. And there is a particular scene involving a piece of fruit that will stay with you after the screening. But the sex isn’t used as a special effect or an exploitative gimmick. Sure it is titilating but never salacious. And there are real emotions on display. Chalamet capitalizes on the theme especially in the film’s closing moments.

Of note is Michael Stuhlbarg, who plays Elio’s father, a sensitive academic. Stuhlbarg is having a great year, also appearing in a critical role in another awards darling “The Shape of Water.” But in “Call Me By Your Name,” he shares one of the best father/child scenes ever on screen. It’s a scene that rivals the interaction between Ellen Page and J. K. Simmons in the Oscar-winning “Juno.”

Raw and honest, “Call Me By Your Name” exposes loss of innocence while celebrating the importance of one’s first love in a mature, albeit graphic, way.