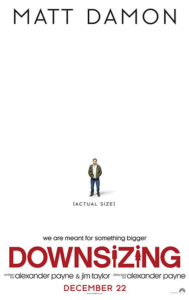 Polarizing writer/director Alexander Payne (who gave us the wonderful “The Descendants” and the iconic “Sideways”) assembles a talented cast for this high-concept social satire. And while there are interesting questions raised, the film plays it safe, never going dark enough to capitalize upon the irreverent ideas initially introduced.

In the fantastical “Downsizing” narrative, Matt Damon plays Paul Safranek, a man who decides to get small. In the future a technology has emerged that can solve the world’s resource problems by shrinking people. Of course, things don’t go according to plan and when Paul awakens from the life-changing procedure, he discovers that his wife (Kristen Wiig) didn’t go through with it.

Scoring points early by skewering consumerism, “Downsizing” feels like three movies in one, with the final third reminding us of “Joe Versus the Volcano” and feeling a little forced. Still, there’s a lot to like here, including, at least, initially, Damon’s bumbling everyman performance and a breakout by Hong Chau. She plays the film’s most endearing and interesting character, a Vietnamese dissident who is shrunk against her will as political punishment. Her story alone should have provided the basis of the entire film, but as is, “Downsizing” is an edgy comedy that’s more goofy than impactful.

From what I can tell from the constantly evolving trailers for “Downsizing,” the movie is suffering from a difficult marketing campaign that has been constantly teasing story elements and shifting the thematic focus. Selling this film to audiences has proven to be quite a chore. Part of the problem has to do with the somewhat disjointed narrative that melds various plots together in a jarring way. But one major issue is Matt Damon.

Damon is the ultimate everyman actor, who has deliberate and limited radiance, but in the right project, he can be very effective. While he’s a talented movie star, Damon is often like Tom Hanks without as much charisma. And in “Downsizing,” the story requires him to be so inert and reactionary that by the time his character has a moment, we’re barely engaged enough to even care. This does provide an opening for Chau, who easily steals the film, and I suppose that credit has to go to Damon for staying in meek and mild mode until the bitter end.

If you think about what is in play in this film, had an actor like Jim Carrey been cast as Paul, the comedic value would have improved significantly. Still, perhaps the story would have lost some of its heart. Carrey was terrific in “The Truman Show,” a film that bares some similarity to “Downsizing.” One of the reasons why that film worked had to do with the potential that Carrey might, at any minute, explode into his torrent of facial ticks and contortions.

By comparison, Damon doesn’t have a back catalog of wacky characters from which to draw upon to keep viewers on edge. We know who Damon is, and as Paul, he dutifully does what is expected of him—he plays the dependable Damon of which we’re are all familiar. This takes a science fiction high-concept satire that should be provocative and darkly funny and makes it surprisingly ordinary.