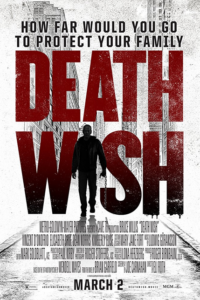 Not edgy enough, comically violent, flatly shot, and lacking a point, “Death Wish (2018)” is an unnecessary and perfunctory remake.

My, oh, my have the times changed. Back in 1974, the original “Death Wish” featured a horrific scene in which actor Jeff Goldblum played a crazed and demented hoodlum, who sodomizes a young woman and beats her mother to death. That scene in particular is so ugly that even today it assaults the viewer. It’s hard to watch.

Back then, I’m told, the film created something of a sensation. It was a lurid tale about a Korean War conscientious objector named Paul Kersey (Charles Bronson), who had an unusual relationship with guns. And when his wife is brutally beaten to death in his New York apartment, and his daughter terribly sexually assaulted, something in him begins to change.

This change in Kersey is measured and somewhat believable. He starts his journey down the dark and dangerous New York streets armed with a sock full of quarters. And thumping a would be robber with that lethal sock makes Kersey smile.

In “Death Wish (2018),” there is nothing as quaint as a sock full of quarters, but there’s nothing shocking either. One-time action star Bruce Willis steps into the Kersey role. The choice is a good one. Even though he is technically 10 years older than Bronson when he played Kersey, the fit Willis can easily pull off a man in his early 50s. But it’s Willis’ acting choices that are lacking. He appears to be channelling the stone-faced Bronson, but adding in that trademark Willis smirk. It’s just plain weird, and saps all of the typical Willis charisma out of the performance.

To be fair, the updated “Death Wish” script from tough guy writer Joe Carnahan (“Smoking Aces” and the underrated “The Grey”) doesn’t help. Instead of a meek architect with a past involving guns, Carnahan makes this more modern Kersey a laid back ER doctor, who is quick-witted but slow to action. The story is moved to Chicago, where gun violence is shown to be rampant. In the opening scene, Kersey steps into an ER suite, puts his fingers on the neck of a police officer that has come in with a gunshot wound, and without performing any CPR or doing anything declares the guy dead. Later in a soft, emotionless tone, he tells the officer’s grieving partner that he did everything he could do. Yeah, right. I laughed. Was I supposed to?

Later, while Kersey is called away to the hospital, his home is invaded and in an tragic turn of events, his wife (Elisabeth Shue) is shot to death. His college-bound daughter (Camila Morrone) is beaten and left in a coma. Naturally, the detective (“Breaking Bad’s” Dean Norris) in charge is overwhelmed with other shooting cases. He explains to Kersey that finding the killers will just be a matter of time. Kersey isn’t very patient.

Back in 1974, solving the case and catching the killer wasn’t what drove Kersey. Killing bad guys just made him feel better. Happiness became a warm gun. But in 2018, Kersey is given purpose, he wants answers, and he is willing to carry out violent justice. But this is completely wrong-headed. Carnahan and director Eli Roth turn the novel source material by Brian Garfield into just another subpar home invasion thriller, and a contrived one at that.

Still, when Willis breaks out of his shell, some guilty pleasures emerge. While you’ve already seen many of the film’s comic kills in the trailer, seeing them in context can strike your funny bone. And horror auteur Roth (“Cabin Fever”) smartly dishes out the blood-letting. When Kersey delivers his deadly brand of swift retribution, the blood oozes and flows almost to an excessive degree. But while these images are comically fun, they do nothing to deepen the narrative on a social message level.

In the 1974 film, there was an interesting subplot in which the city’s mayor, police chief, and a detective (played by the late, great Vincent Gardenia) entertain whether bringing Kersey, the newly minted vigilante, to justice is even a good idea. Crime statistics are reviewed, and their plan is really fascinating. The detective figures out that Kersey is the vigilante pretty early. This sets up a mature and believable and tense conclusion providing something to discuss thereafter. The muted political subtext combined with the raw violence made the movie memorable.

In the 2018 version, effort is made through use of Sirius/XM talk radio broadcasts to comment on the efficacy of vigilante justice. But this discussion is very much tacked on. And while Kersey descends into madness, it isn’t far enough. This is a watered down mainstream version of much more edgy material. And by polishing the edges off, “Death Wish (2018)” fails to distinguish itself. It’s just another revenge tale, where the deafening sound of gunfire neatly ties up all the loose ends.