Ever wish you could become a different person? Just change your name and be someone else? In “Oh Lucy,” one way of escaping is doing just that. 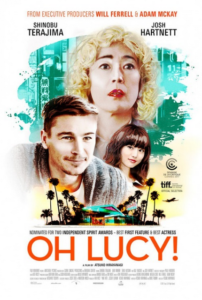 Setsuko (Shinobu Terajima) is single, with no children, stuck in a boring job. In the evenings, she retreats to her tiny apartment that is jammed with garbage. The television is on, but she’s hardly even paying attention. One morning on her way to work, a man whispers “goodbye” into her ear and jumps in front of a speeding subway. His suicide is part of a trend. Barely shaken, Setsuko dutifully goes to work.

In time, she will meet John (Josh Hartnett) an odd teacher of American English. When she meets John, he hugs her tightly, saying something like “what can I say, I’m a hugger.” And he names her “Lucy.” John even picks out a blonde wig for her, making the transformation complete. But the change in Setsuko is more than just a name and new hair. She’s found something different that makes her different as well.

Director Atsuko Hirayanagi mixes drama and romantic comedy in a unique way. It’s a culture clash, handled quite deftly. When the newly minted Lucy decides to chase her niece to California, she’s really searching for herself. And finding one’s true identity can be a broken process.

Terajima is the standout here. The character is written so that while we sympathize with her, we don’t like her choices. She’s pathetic, but understandably so. And Hirayanagi is bound and determined not to yield to formulaic rom-com elements. The story and characters are messy like real life.

It’s good to see Hartnett in a small movie where his smoldering gaze contains a troubled backstory. Like his fine work in the series “Penny Dreadful,” Hartnett’s John is hiding so much and unable to control how his life evolves. Years ago, I spoke with him at Sundance about the fun action film “Lucky Number Slevin.” Since that time, Hartnett appears to have barely aged, but his on-screen maturity is evident here.

“Oh Lucy” is not a happy film, but it sure is a hopeful one. Setsuko might masquerade as Lucy, but Setsuko is always there. Lucy just makes her better, and we could all use an escape from who we are every once in a while.