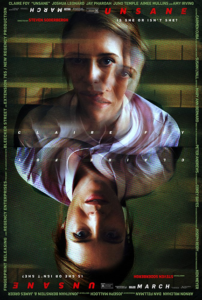 Ugly, intentionally so, Steven Soderbergh pulls out his iPhone and remakes the nightmarish “Shock

Corridor” for the “MeToo” generation. Schlocky and hard to look at, “Unsane” will be divisive. Hampered by a hackneyed conclusion, there’s still much to like, but you never forget you’re watching a movie shot on a phone, and that’s a problem.

When Sawyer Valentini (Claire Foy) relocates to a new town, she has a hard time restarting her life. Haunted by recent past events, she’s always ill at ease. After being hit on by her lecherous, leering boss, and ending a date with another guy abruptly, Sawyer reasons that she needs some professional help. Sitting in her bed at night accompanied by her trusty laptop, Google is consulted. This random search leads her to a mental health facility and a temporary commitment. But is anything that happens to her really happening?

A product placement for Apple, the well-meaning script strains credulity if taken literally. Instead, you’re meant, if I can be kind, to take the film metaphorically as a rolling bit of magical realism. So, when Sawyer finds herself committed in a co-ed facility against her will, the conditions and the ridiculous medical treatments and practices are very much like one might experience in a nightmare world. And if you buy into this approach, as one might accept the minimalistic stylings of something from the mind of Lars von Trier, “Unsane” is a perfect arthouse thriller.

But, and there’s a big “but” here, Soderbergh’s visual choice, relying on the weak image delivered by a garden-variety iPhone 7, takes some getting used to. A gifted filmmaker, who is a pioneer using the beloved Red camera, Soderbergh jumps into the iPhone filmmaking revolution completely, and that is to his peril.

Sure, on a level, the coarse, greenish, harsh looking video feel is intentionally meant to make you uncomfortable. But beyond putting your eyes on edge, the look serves to constantly remind us that we’re watching a video experiment. The effect is to undercut the narrative intent. It caused me to focus on the technical elements lessening my connection to Sawyer’s emotional condition and her plight.

And given the obvious olive branch to current events, this is a shame. I’d say that watching it another time in which I force myself to focus on narrative is in order, but since the film is so ugly and harsh, it wouldn’t pass as entertaining. To say that “Unsane” is educational is hardly a compliment.

Soderbergh has said that he wants to make all his movies on an iPhone moving forward. While that might be good for Apple’s bottom line, it’s not a good thing for those of us who have adored his work over the years. Of course, Soderbergh told us years ago that he was retiring, and thankfully, that proved to not be forever. My hope is that his iPhone phase passes with some interesting experiments, but he returns to his Red camera and images that don’t hurt my eyes.

Sleep and dream experts have often debated what it means if someone dreams in color or in black and white. But Soderbergh suggests something altogether different and undeniably modern. Maybe in this new age, it is possible to dream, or in this case, have a nightmare that looks like it was captured on an iPhone. And while the idea is interesting, even unsettling, I found “Unsane” distracting and lacking the immersive qualities that mark the best examples of cinema.