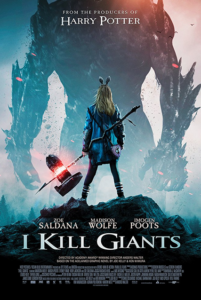 “A giant is hate,” Barbara tells her new best friend Sophia. The two girls are holed up in a makeshift fort on the beach below Barbara’s house. Barbara hunts and kills giants, but nobody believes her.

A good-looking and well acted graphic novel adaptation, “I Kill Giants” is the moving and entertaining tale of a little girl dealing with personal trauma. The story has Barbara (a very good Madison Wolfe) and her siblings trying to cope with life without their parents. As her brothers battle video game threats from the safety of their couch, Barbara explores the outside, spending time alone in the woods laying traps for what she sees as a mounting giant invasion.

Meanwhile her beleaguered older sister Karen (Imogen Poots) struggles to keep the house clean and food on the table. Karen’s reaching a breaking point. Something’s gotta give as the family balance is tilting in favor of chaos.

One day, Barbara meets Sophia (Sydney Wade), a new kid who moved in from England. Having no friends and riding the same school bus, Sydney decides to befriend Barbara. It’s Sydney who may know something of the dire family situation—hearts instantly bond.

At school, Barbara is followed by a counsellor named Mollé (Zoe Saldana). Coming into the counseling game from another discipline, Mollé’s sensitive techniques are still in development. She wants to help Barbara deal with her family secret, which is part of the film’s mystery that we aren’t told about in great detail. Barbara pushes Mollé away.

Poignant, “I Kill Giants” uses fantasy elements to grab viewers and discuss the effect of tragedy on the youngest among us. It also reminds us of the importance of creativity and imagination as a device to deal with life’s difficulties. The narrative feels almost like something from the Spielberg school, as Barbara immerses herself in the fantastical to escape the real. And it’s hard forget that this kind of story was given similar treatment a couple years ago with “A Monster Calls.” But “I Kill Giants” is more accessible and satisfying.

In “I Kill Giants,” monsters are all around Barbara, some of them are in her imagination, but only by being imaginative can she cope with the realities of the world.