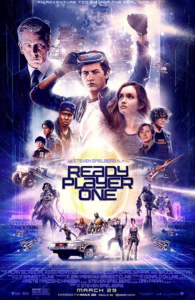 know things are bad when funnyman Will Ferrell gets serious and deletes his Facebook account. The monster virtual social network that has become so ubiquitous took a hit recently as privacy concerns reared their ugly head. But what site, app, program or game will replace it? The virtual is very real, and love it or hate it, it’s here to stay.

A prescient story, “Ready Player One” graphically displays what might happen if people stop caring about the real and lose themselves in the virtual. The problem is already with us, and the difference between worlds is often blurry.

In “Ready Player One” finding an easter egg in a video game might change the course of history. The film is Spielberg’s attempt to translate to the big screen the best-selling throwback novel of the same name written by Ernest Cline. Having read the book, I can safely say Spielberg has largely succeeded. But in making the unique story more relatable to a broad viewing audience, much of the charm that endeared the novel to readers is lost. And by relying so heavily on animation, this might be the least Spielbergian of the great master’s films to date.

In the somewhat near future, the bulk of society have launched themselves into a virtual world known as the Oasis. Created by a programming savant named James Halliday (Oscar winner Mark Rylance), the Oasis is a video game like no other. And when Halliday dies, he leaves a legacy that promises complete control over the system to the person who finds a hidden easter egg. What’s an easter egg? It’s a secret that has been stowed away in a video game by the designer, often even unknown to the company that sells and markets the game.

When teenager Wade Watts (Tye Sheridan) cleverly wins the game’s first challenge and is granted Halliday’s first of three keys (the copper key), he finds himself besieged by almost everyone. Wade, whose avatar name in the Oasis is Parzival, is then hunted by IOI, an evil corporation who has made finding the egg its primary mission. Led by one-time Halliday intern Sorrento (Ben Mendelsohn), IOI will stop at nothing to take the egg into its corporate treasury. And that means that Wade/Parzival is now playing the game with his very life at stake.

Mainly a computer generated animation extravaganza, “Ready Player One” spends too much time focused on action and thrills and not enough time on the marvelous world building. Hence the character development of the novel is jettisoned in favor of a chase narrative that compresses so much story that the entire affair seems rushed and over-labored. But that isn’t to say it’s not fun, and one scene involving a famous Stanley Kubrick film is the movie’s highlight.

But what would likely have been better served in a long-form series format is condensed into a relatively breezy two hours and twenty minutes (yes, the film is paced well). Cut from the screenplay are many of the book’s quirky pop culture references that effectively brought generations together. For example, in the novel, Wade must compete for the copper key over a classic arcade match of Joust. Later, he plays the movie “WarGames.” When he looks at his reflection, while reciting lines of movie dialogue and acting scenes out exactly, he can see himself as a young Matthew Broderick. These entire sequences are cut, which is a huge disappointment.

Also, the romance between Wade and Samantha/Art3mis (Olivia Cooke) is not nearly as impactful as it was in the source material. The script by Zak Penn and novelist Cline makes significant changes that undercut the wonder of the book’s ultimate romantic reveal. Because action is the priority little effort is made for an authentic moment between the two that isn’t the product of some thrilling animated sequence. There is about as much chemistry between Wade and Samantha as between Sam and Mikaela from the first “Transformers” film. And the main reason? Because the movie moves events around so that key moments occur too early.

I’m 47 and reading “Ready Player One” with my 14 year-old daughter was absolute magic. The novel allowed me in a very entertaining way to introduce to her a lot of my childhood treasures. My old Atari 2600, gathering dust on a shelf in my office, now has new meaning. Sure, the Ernest Cline novel did get really nerdy as it wallows in ‘80s cheese, but what made it such an interesting read was how it transcended and leveraged the avalanche of ‘80s material for an emotional and currently relevant purpose. The movie is fun but not as meaningful.

Let’s face it, my generation has a great amount of responsibility for many of the problems that plague our oversaturated digital age. The technology and patterns given birth in the 1980s have inevitably led to the ever-growing digital lifestyle that we are inundated with today. Will Ferrell might be right, maybe it’s time to hit delete.