When Bryan Singer left the set of “Bohemian Rhapsody,” “Eddie the Eagle” director Dexter Fletcher came in and replaced him. But Singer’s name is still on the project as a co-director. The first poster, which I’ve included here, doesn’t list any credits, so, it remains to be seen how Singer will be credited (first or second or even as a director). One 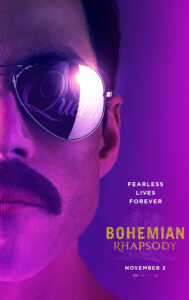 wonders what contractual obligations still exist, after everyone alleged breach. I’m thinking that an arbitration may have been entertained to resolve outstanding issues.

While the legal wrangling may still be raging, looking at the rocking trailer, you’d never know that there were problems behind the scenes. In the film, “Mr. Robot’s” Rami Malek plays Queen frontman Freddie Mercury. And he certainly looks the part with what can really be described as an inventive bit of casting. Malek is easily one of the most interesting faces working these days, so, I’m very hip on seeing him in this one.

Another notable cast member is Mike Myers. Director Fletcher and Myers can be seen on screen together in “Terminal,” which I reviewed last week. Maybe that explains how Fletcher got the directing gig. Needless to say, this is a big film for Fletcher, who has been acting since he played as Baby Face in Alan Parker’s hugely entertaining musical “Bugsy Malone.”

“Bohemian Rhapsody” is scheduled to play wide on November 2, 2018.