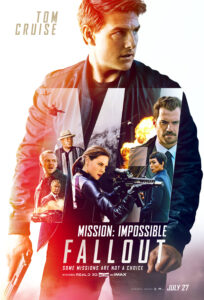 The constant throughout the franchise has been the ageless male Tom Cruise, who inhabits the edgy hero Ethan Hunt, a mysterious spy. After being effectively rebooted, in a way, in 2011 with “Ghost Protocol,” the series has been very lucrative for Paramount and Cruise, who has also been a producer from day one.

Based on the trailer below, this time around Hunt and his IMF team take on a threat that could go nuclear. Needless to say, the mission is pretty impossible.

Here’s my personal ranking of the previous “MI” films: