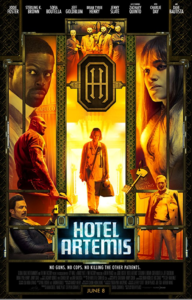 Great work by Jodie Foster and Dave Bautista isn’t enough to fully elevate “Hotel Artemis,” a futuristic action thriller set in a members-only emergency room for high end criminals. But it is fun to see all the pieces assembled by writer turned director Drew Pearce in his feature film debut.

When Waikiki (Sterling K. Brown) and his brother Honolulu (“Atlanta’s” Brian Tyree Henry) botch a robbery during a massive Los Angeles riot, they turn to the Hotel Artemis to patch them up. A private emergency room housed within the decaying walls of an old hotel, the Artemis was set up to service the medical needs of criminals. Run by The Nurse (Jodie Foster) and her dutiful, bulked up orderly named Everest (Dave Bautista), the nasty looking place features some high-tech medicine. And while Waikiki and Honolulu (named after rooms in the hotel) are mortally injured, The Nurse is more than capable of plugging up the worst of the worst.

At one point, a character’s liver is removed and replaced with a new one that is printed right there on a 3-D printer. Other technological medical marvels include the use of nanotechnology that speeds up the healing process magically. And, of course, there’s lots of drugs, some taken orally, but others brutally injected whenever, it seems, the mood strikes.

The “Hotel Artemis” set-up is very clever. The script from writer Drew Pearce (“Iron Man 3”), who also directs, begins almost like something from the world of the “The Purge” franchise. But Pearce leans heavily into science fiction with lots of marvelous toys. In addition to nanotechnology, we get holographic cellphones and 3-D printed guns.

While the narrative teases a large conflict brewing outside the walls of the hotel. Most of the action is tightly confined. And as a contained thriller, it is surprising how constrained the action sequences proved to be. There is a moment in a hotel hallway where I got a definite “Oldboy” vibe, but Pearce and his team don’t go full Chan-wook Park. This is a pity, because aside from one spirited hallway fight led by the athletic Sofia Boutella, we are deprived of a really revved up, violent showdown involving Bautista, who is a major draw here.

Pearce clearly wants to showcase character over action. And to that end, he is blessed with the always wonderful Jodie Foster. Foster is a big presence in this little picture. And it is great to see her once again in this genre (see “Elysium” and “Contact”). The veteran actress, who started as a child on screen, moving on to win two Oscars, and eventually becoming a mighty fine director in search of the right project.

As The Nurse, Foster is doing all sorts of emoting. Her character spends most of her time healing wounds, but she is unable to repair her own emotional ones. For this role, Foster makes herself look bad, old isn’t really the right word, but it is the word used in the film. She looks haggard, clearly an alcoholic, clearly a broken soul. We buy all of this instantly even as she prints a guy a new liver. Foster walks around the hotel in little shuffling steps—scurrying. It’s a very physical performance. 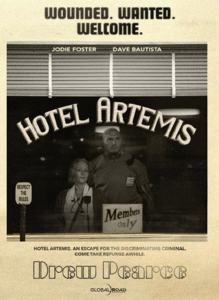 And her work along side Bautista is solid. There is a chemistry between them. It’s not of the romantic variety, not exactly, but the two complement one another well. Perhaps because of his intimidating appearance and size, Bautista manages to always surprise us by how tender he can be, going from breaking bones and cracking heads to offering comforting words at breakneck speed. When both of them are on screen, the diminutive Foster in her haggard and withdrawn mode, and Bautista as a bruiser with a heart, it is hard to take your eyes off them.

But even though the futuristic setup is great and the characterizations by Bautista and Foster engaging, “Hotel Artemis” doesn’t really know what to do with them. The final sequences feel rushed and utterly contrived. While not as bad as 2010’s “Repo Men,” things do get a bit wacky and gruesome. And like I said earlier, we don’t even get a well-staged fight-sequence involving Bautista. It’s all a bit of a letdown, although getting there is fun.

Sadly, the world built in “Hotel Artemis” by writer turned director Drew Pearce isn’t given a movie strong enough to launch a franchise. What could have been another “John Wick” or another “Purge” just kind of petters out. And this is a real shame, because Foster and Bautista make a great pair.