I’m so confused. And writer/director Bruce La Bruce wants it that way. 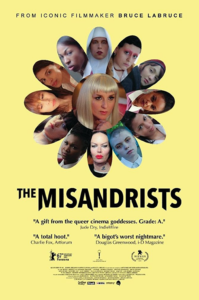 Should I stop writing? Is it time to step aside and let other, more diverse voices fill the small space that I have occupied on the web for the last 20-plus years? Snarky retorts will no doubt follow in the comments section.

In “The Misandrists,” an injured, young man named Volker (Til Schindler), who is fleeing the authorities, finds himself at the mercy of the women housed in an isolated school for wayward girls. At first, he is protected by the beautiful Isolde (Kita Updike), who secretly tends to his wounds in the basement of the facility. Loosely following the playbook established by “The Beguiled,” Volker strikes up a cloistered romance with Isolde and captures the wandering imagination of the other girls.

Meanwhile, the school’s headmistress, Big Mother (Susanne Sachße), engages in a campaign of brain-washing demanding that the girls suppress any feelings for the opposite sex and join her feminist revolution. This cult-in-the-making might turn violent as Big Mother’s hatred of the penis will be taken to dangerous extremes. Secrets abound as Isolode struggles to keep Volker hidden, while also trying to stay in the school’s good graces. 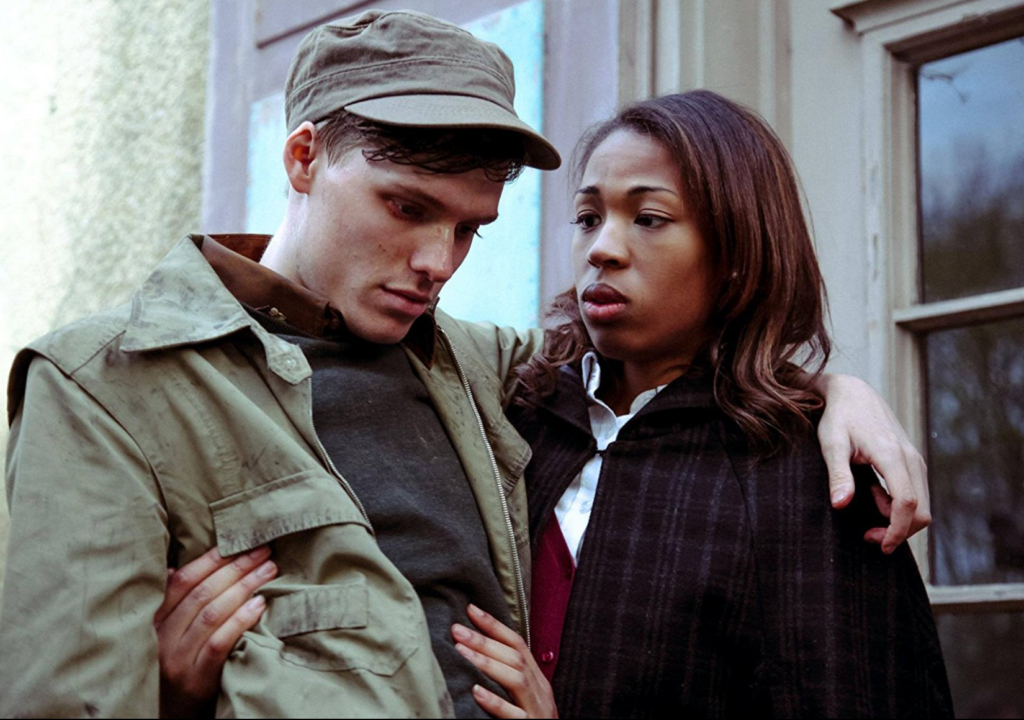 A complete satirical fantasy, very little in “The Masandrists” is meant to be taken literally. And the stilted, highly stylized approach reminiscent of the sexploitation work of famed filmmaker Russ Meyer, an easy reference here, and the more contemporary movies of edgy director Steve Balderson, is the hallmark of filmmaker La Bruce. Back in 2004, while covering the Sundance Film Festival, I briefly, in passing, met the red, vinyl suit wearing La Bruce at a midnight screening of his political porn film “The Raspberry Reich,” which was an in-your-face head-scratcher. Needless to say, he’s working through some gender-bending issues, and it might be no better time for his variety of filmmaking to challenge conventional notions of feminism and masculinity.

“The Misandrists” is not for everyone. And as Brie Larson pointed out recently, it might be worth seeking out a critic who neatly fits into this film’s target audience. However, this begs the ultimate question, who is La Bruce’s intended viewer here? I’d argue that as a straight, often Republican-leaning, white male, who has reviewed movies for over 20 years, I might be the best viewer to be reached by its challenging often dense political message. 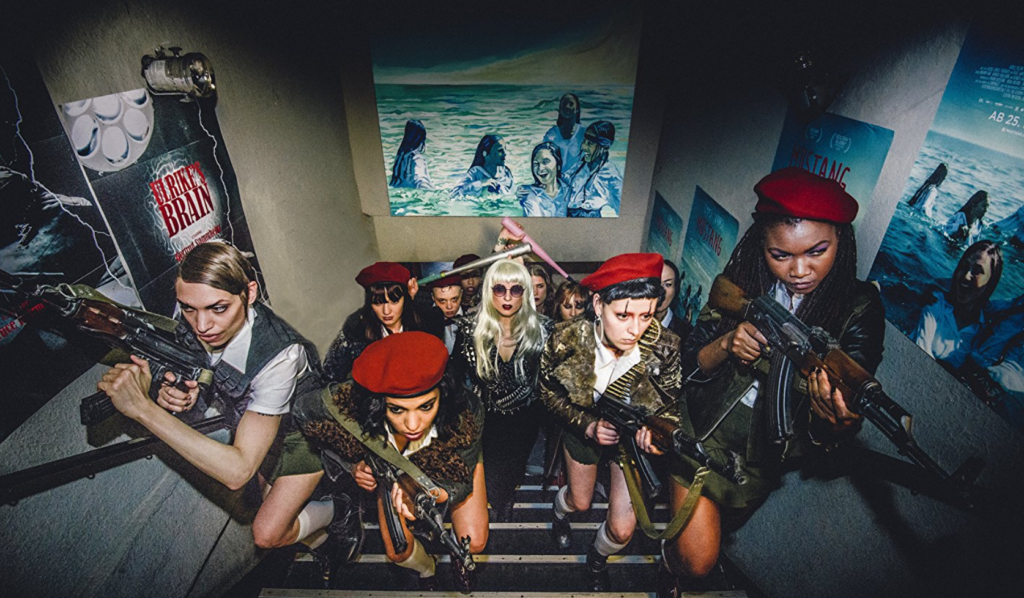 And it is important to note that as weird and awkward as this film is, featuring intentionally cardboard characterizations and wooden acting along side highly charged sexual images, the script is replete with references to political theory that move so quickly from the lips of the actors that I couldn’t keep up. While La Bruce may have become knee deep in research to craft this tale of female liberation, his most powerful images very well might be his end title sequence that features photos of women from the last hundred or so years in various positions supporting and protesting against war efforts. We see women of all nationalities some with signs of protest and others with guns. It is a striking montage.

And with that being said, what is my place in film criticism? Larson is clearly right, more diversity is needed. My small blog in Atlanta is always available to any writer (whether male, female, any race and so forth), and I’m usually permitted a plus one at press screenings, meaning access is certainly not restricted. Any writer who takes the time to create a platform for his or her work should have no problem watching films at advanced screenings. In fact, new voices are encouraged in my experience—thank you Roger Ebert.

For example, back in the late 1990s, as the editor-in-chief of the movie website einsiders.com, I had to work very hard to convince public relations that my form of journalism was legitimate. It was a long struggle joined by the likes of pioneering writers such as Atlanta’s own Nick Nunziata and later mighty fine, critical voices Matt Goldberg at Collider and Shakefire’s Matt Rodriguez. It isn’t overstepping to suggest that our efforts helped pave the way for the democratization of the film criticism medium that for me began in the 1980s while working in a video store in rural Georgia.

My first professional writings on the web in the 1990s were of VHS offerings gleaned from the shelves of the local video store. The grist for sharing my thoughts was all around me. Later, as I traveled to Sundance, Tribeca and other major festivals, sitting in makeshift screening venues beside my idol Roger Ebert and my favorite critic as a child Eleanor Ringel, I learned the craft, but I was never happy with the voice I had at any particular moment. Writing about movies is part of my on-going maturation as a father, a husband, a man, as a person. To give up this part of my life would be to experience a death in my family. So, I continue. 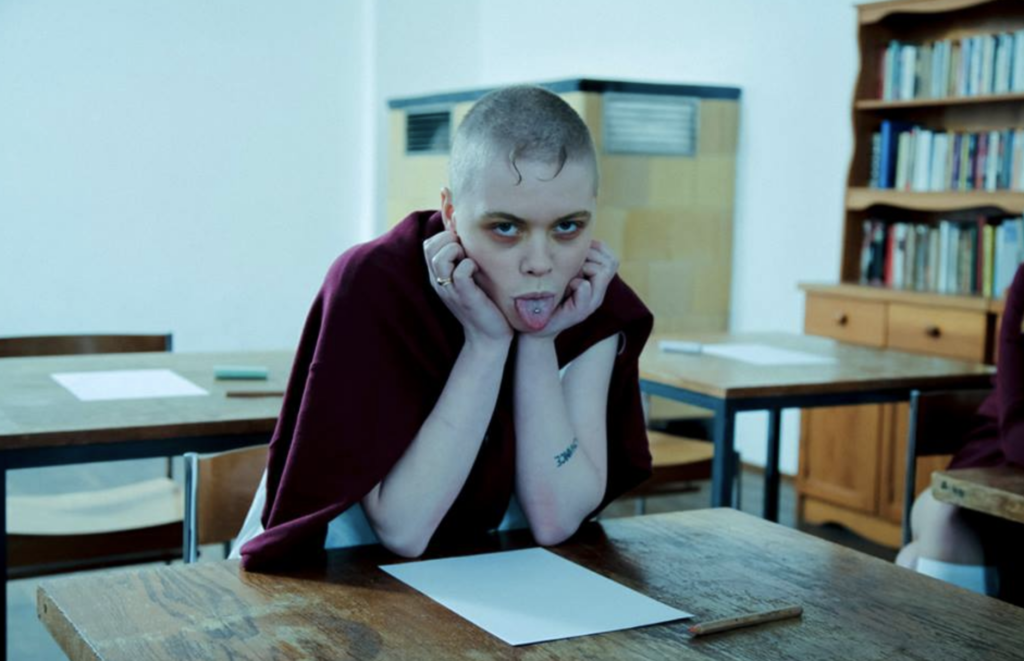 But the problem of lack of diversity in film criticism relates directly to the fact that becoming a film critic just isn’t a very good career move. It doesn’t matter if you’re a man, a woman, gay, straight, or a person of color—film reviews alone aren’t likely to pay the bills. And to be a marquee critic, you have to spend literally hours and hours watching films, many that are not targeted at you. And you have to write, and write, and edit, and write more, and edit even more. Like all writing, it is a solitary activity that in this case begins in the dark (literally). I’ve never done this for the money. And I probably never will.

One last thought about “The Misandrists” is that it was largely crowd-funded. One possible solution to the diversity problem in film criticism is for the people to put their money where their mouths are—a Kickstarter to pay the expenses of critics (of all walks of life). Like it or not, money is always the game-changer. Think about what would have happened had “Black Panther” bombed. Thankfully, it was a huge hit, and justifiably so. While it’s not likely that the newspaper business will ever see another Roger Ebert, the democratization of this field that he helped give birth to with his everyman style of writing continues to flourish. New voices are needed, please lend us yours.

DailyFilmFix.com is now and always seeking writers. Email me (dailyfilmfix[at]gmail.com).