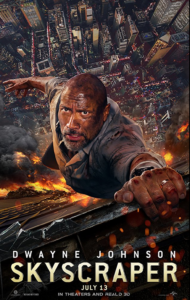 The brainchild of writer/director Rawson Marshall Thurber (“Dodgeball: A True Underdog Story” and “Central Intelligence”), “Skyscraper” is a movie cobbled together by watching other movies. Thurber has been quoted as saying that he watched movies like 1993’s “Cliffhanger” while writing the script, which explains the throwback nature of the story that also borrows heavily from “Die Hard.”

While this approach to creating the next cheesy blockbuster is certainly not uncommon, it is unusual to see a movie this nakedly derivative given such a high profile release. The film’s sizable budget can be attributed to the belief that “Skyscraper,” with a story set in Hong Kong, will do well in China. Domestic audiences, however, will experience deja vu of the worst kind. “Skyscraper” is wholly unoriginal, even though Dwayne Johnson does his best with the ridiculous material. 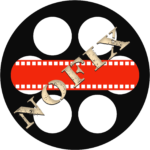 The film opens with a definite nod to “Cliffhanger” as special forces commander Will Sawyer (Johnson) leads his team into a hostage situation with unsettling results. Almost killed from the encounter, Sawyer, who also lost a leg in the incident, years later, runs his own private security company. He’s married the military doctor Sarah (Neve Campbell) who saved him, and the two have a couple of cute, young children (a boy and a girl, naturally). When one of his old soldier buddies, Ben (Pablo Schreiber), calls Sawyer to Hong Kong on a big security job, the family tags along.

The big job involves approving the security for a mega-building built by a tech billionaire (played by Chin Han). The skyscraper, which is to be the world’s tallest, is an architectural marvel, and the initial setup is really cool. Unfortunately, after this brief introduction to the location, the building itself isn’t used in any new way as conventional action set pieces are mounted.

Basically, the story is straight out of 1988’s “Die Hard.” The tech billionaire responsible for the structure has something valuable and a group of international mercenaries want to steal it. And to that end, they will bring a billion dollar building down in order to steal that one thing. While setting a skyscraper on fire does make for some visual excitement, it makes such little sense that viewers either forget or never even care about the heist.

What is almost unforgivable are scenes that have been generically lifted from better movies, principally “Die Hard.” There’s even a scene where a computer hacker makes sarcastic quips while typing. Thrown into the mix is a huge amount of mindless gunplay that further adds to the foolishness of it all. For example, before the hacker sits down to do his thing, the bad guys literally spray bullets all over the computer control room. They kill everyone and destroy most of the equipment that, one would think, the hacker would need in order to get into the system. But no matter, the bloodless kill-fest doesn’t seem to slow anyone down.

“Skyscraper” is a series of one stupid sequence after another. It is as if Thurber just didn’t care if anything made any sense and just wanted to give Johnson a chance to jump from a crane to the building, and to scale the side of a skyscraper using duct tape. And there are some thrilling seconds (not exactly moments) here and there, but any hint of inspiration is sapped immediately by the completely dumb narrative elements.

“Skyscraper” exploits Johnson like few movies in his filmography. And, why not, he’s a great screen presence. His natural charisma extends way beyond his impressive, muscular physique. The guy is magnetic. But if he keeps making films that rely almost exclusively on his name to drawn in viewers, the goodwill that he’s built up will fade away. With guys like Dave Bautista already getting bigger and bigger roles, Johnson really needs to think about protecting his brand.

After last year’s just plain awful “Baywatch” and the lack-luster performance of “Rampage,” “Skyscraper” is, in comparison, a marginal improvement. But with a reported $125 million budget, marginal might not be enough.