Loose and unfocused, this Gus Van Sant/Joaquin Phoenix collaboration will frustrate and bemuse, as the inspiring tale of an unlikely artist unfurls. 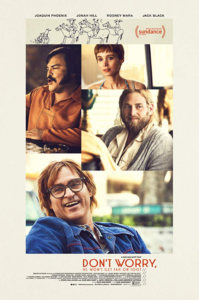 Joaquin Phoenix is a beguiling screen presence. I like him in almost everything, but “like” is the wrong word. In the right role, he’s perfect. This is why the announcement that he will be playing The Joker in an upcoming comic book adaptation is so interesting. He’s the most unpredictable actor working today, even if his mannerisms and mumbled speech cadence are becoming all too familiar.

Phoenix’ prickly on-screen persona is on full display in Gus Van Sant’s “Don’t Worry, He Won’t Get Far on Foot.” In the film, Phoenix plays late cartoonist John Callahan, who after a crippling car accident at age 21 found his true calling drawing panels for newspapers and magazines. His cartoons exposed a scabrous humor, that was reluctantly embraced by sophisticated readers. The film isn’t a comedy, but it wants to be one, I think, on a dark level. Rather than hearty laughs, we get an exploration of Callahan’s efforts to find sobriety and himself. And for those with experience with addiction issues, the movie is spot-on and essential.

But what’s missing is focus on Callahan’s most popular and potentially inspiring attributes. He was an artist that, despite his disability, achieved a high level of success. It’s the “despite his disability” part of my previous sentence that would give him grist for his “politically incorrect” panels. In briefly reading about him, his work was so controversial that one Portland newspaper had to deal with boycotts. While this is hinted at in Van Sant’s film, the artistic work takes a backseat to Callahan’s battle with the bottle. Unfortunately, this aspect of his life is not nearly as interesting as how he channeled his addiction-fueled-aggression into a high art form. 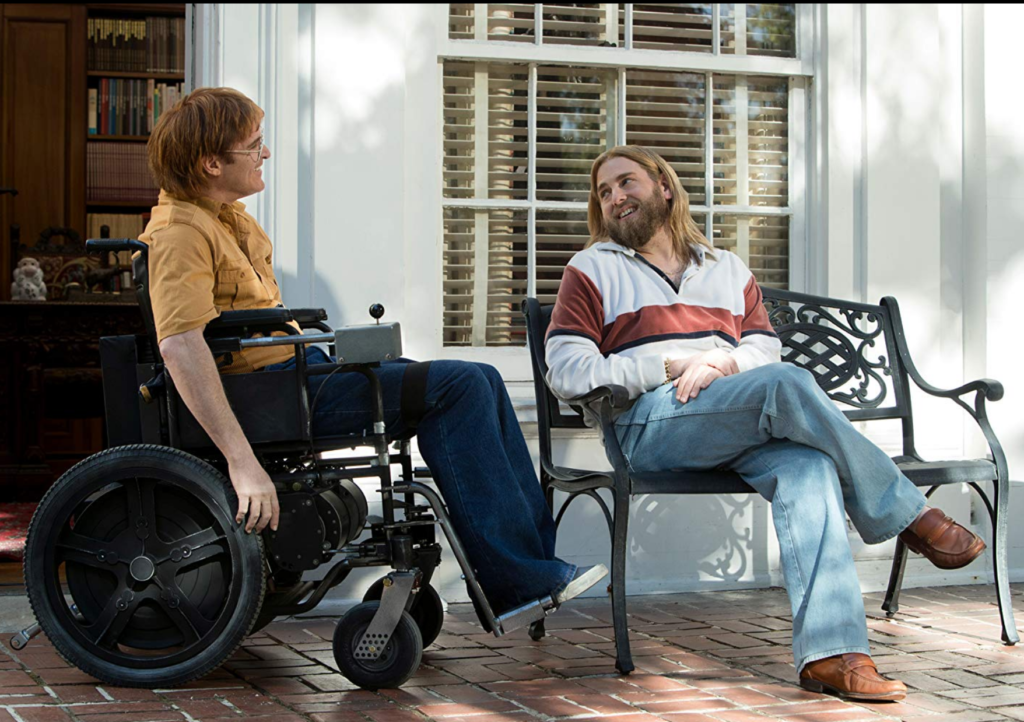 One simple joy in the movie is watching an almost unrecognizable Jonah Hill wax on about the virtues of a step-program for dealing with and managing alcoholism. Hill plays Donnie, Callahan’s sponsor and self-appointed Alcoholic’s Anonymous guru. When Callahan and Donnie are on screen together, their chemistry is natural and authentic. Hill is really good in the role, and this performance is a testament to his evolution from wise-cracking teen to fully-formed actor.

But Van Sant veers away from this relationship and gives Callahan a quasi-girlfriend named Annu (Rooney Mara). This forced relationship is like something from outer space. It is as though she was beamed in from another universe, as Van Sant shoots her almost angelically (lit so softly, it is like watching Michael Landon in an episode of “Highway to Heaven”). The strikingly beautiful Mara delivers an odd, detached performance like that of a ghostly presence.

But what I like best about “Don’t Worry,” aside from Phoenix’ excellent incarnation, is the light almost documentary approach that often marks director Van Sant’s best work. The auteur responsible for mainstream pleasers “Good Will Hunting,” “Finding Forrester,” and “Milk” seems more comfortable when he’s not beholden to studio and producer requirements. And for every indulgent “The Sea of Trees” we get an “Elephant.” “Don’t Worry” isn’t the best of Van Sant, but there are flashes, which will, for some viewers, be enough.