A model for the confined thriller, “The Guilty” is an impressive feature debut for director Gustav Möller. 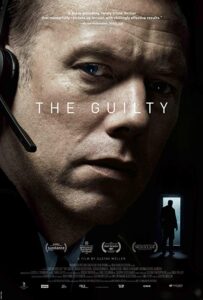 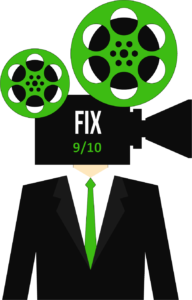 As a suspicious shooting is investigated, police officer Asger (Jakob Cedergren) is busted down to phone duty. On the eve of a hearing that is likely to exonerate him, Asger becomes entangled with a caller, who has been kidnapped. His long nights of taking calls from people, who have overdosed or have been robbed in the red light district, are suddenly upended with a real case. But all Asger can do is talk.

“The Guilty” is a smart and efficient thriller that transpires in what appears to be realtime. Asger, who is dealing with an investigation into his actions, finds himself transformed by a caller’s dilemma. That caller is a woman named Iben (voiced by Jessica Dinnage), who explains cryptically that she’s been taken by a man and she fears for her life. Cleverly, Asger communicates with her, while trying to keep his true identity concealed from Iben’s abductor. A strained cat-and-mouse game is played, and Asger must locate Iben carefully without making her dire situation worse. But what Asger discovers is not at all what it originally seemed.

Demonstrating the power of the unseen, director Möller sets the entire film in just three or so rooms. Asger sits at a computer terminal wearing a headset taking emergency calls. We are introduced to the technology, as shots go from Asger to his computer, to his phone, and then to the room outfitted with banks of computers and other officers manning them. It’s an interesting environment, and a place where human tragedy is played out daily, but not seen by those wearing the headsets.

The frustration Asger experiences is palpable. He’s an officer used to being out in the field, often with a gun at the ready. But once behind the computer, his real-world experience comes in handy. He has a sort of short-hand with those he calls upon for help. And like the other officers that he talks to, he knows the score. Some “emergencies” are nothing of the sort. But unless you have been in the thick of things more than once, unless you’ve been around the bend a few times, you might take every non-emergency too seriously. This callous triage employed by Asger has made him jaded in ways he’s yet to understand. But Iben, and her predicament, might help him.

Captured tightly in a series of marvelous closeups, we see the transformation in Asger over the film’s scant 85 minute running time. He is a man on the edge. Hounded by a newspaper reporter, who is frequently calling his cell phone for comment on the shooting, Asger’s confidence is shattered. And worse, he’s relegated to sitting behind a desk, when he, a man of action, should be out in there fighting injustice and bringing it like only a man of action can.

Asger is played by Jakob Cedergren, a handsome, thin athletic actor, who could easily play the lead in an action-film, leaping and rolling, as he lets loose a barrage of bullets at the bad guys. But here, we see the other side, the credible reality that marks the best police work. Focus is paid closely to his face, his ears, and his eyes. We see the wheels turning, as he relies on his wits to comprehend Iben’s plight. It’s a nerve-wracking experience of a high degree.

What is impressive about “The Guilty” is what it doesn’t do. We never leave the confines of the phone center. We never see Iben. Möller is committed to keeping us in the moment with Asger, to feel the pressure. And the film makes this claustrophobic narrative work. What this approach says about the state of the thriller genre as a whole is telling.

This weekend, we see the release of the direct sequel to 1978’s “Halloween,” a film that had its fair share of explicit violence, but by today’s standards is relatively tame. That sequel’s first half is marvelous, because it does not show us the violence, rather, just teases it, while building the tension. When the gore takes over, the tension is almost lost. “The Guilty” shows us not one single moment of violence, instead, it is described. It’s what we don’t see that is truly the most horrific.

“The Guilty” is a marvelous debut from Swedish director Gustav Möller, who with his first film gets it. Sometimes, we don’t have to see everything to be impacted meaningfully.