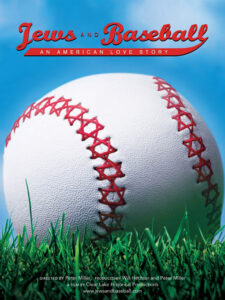 Who knew that Hank Greenberg might be the most significant Jew in American history? Or that his interaction with Jackie Robinson helped pave the way for integration of the sport? The meaty and all-encompassing documentary feature “Jews and Baseball: An American Love Story” makes a convincing argument for both those propositions. The film is an informative history lesson with archived interviews with Greenberg and a rare interview with pitching great Sandy Koufax. It’s a must for baseball fans—Jewish or otherwise.

There are so many stories told in “Jews and Baseball” begging for their own movie. Greenberg’s story alone is worthy of big budget treatment. The tale of his encounter with Robinson after a collision on the field that may have injured Robinson could be a fantastic conclusion. But the ambitious anthology that is “Jews and Baseball” isn’t content focusing on highlights and digs deep into the history of Jewish Americans and the sport. And let’s face it, if you are a baseball fan, you’ll want to see the film to hear from Sandy Koufax. The Koufax interviews are revealing and make the documentary a significant footnote in baseball history.

Narrated in a dry, matter of fact manner by two-time Oscar winner Dustin Hoffman, the movie is more informative than really entertaining. Still, the style of objective filmmaking employed here in the evolving Michael Moore era is a little refreshing and reminiscent of Ken Burns work. No doubt the film will find its way to public television that would do well to court it. The movie does have a number of recognizable personalities lending their thoughts on the subject. Interviews with fans Larry King, Ron Howard, and others are combined with interviews with baseball greats Bob Feller, Yogi Berra, Al Rosen, Kevin Youkilis and many others. The archived interviews, which include the one with the late Greenberg, have been restored and displayed extremely well here. The quality of this production is top notch—old photos and images from the game’s past are excellently restored and utilized. As a documentary filmmaker myself, I can tell you that the artistry involved to produce such a clean and fluid product is no easy task and had to have taken hundreds and hundreds of work hours to complete.

“Jews and Baseball” was the opening night film for this year’s Atlanta Jewish Film Festival, which is on-going through the end of the month. For more information about the growing and popular AJFF visit the festival website: http://www.ajff.org/