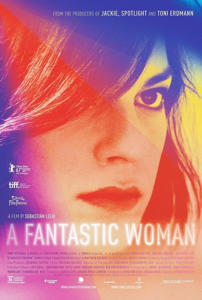 Standing as a boxer would, hands up, fists clenched protecting her face, Marina punches into the air. She breathes as a boxer, returning her fists to the defensive position. She punches again.

Later she strikes a suspended speed bag, and then in another scene, she forcefully delivers blows into a pad as part of some sort of video game. She’s preparing, guarding herself against what may come. And now that her lover has passed away, she’s all alone.

Daniela Vega plays Marina in “A Fantastic Woman.” And her remarkable turn is something of a revelation, as if we are in on some kind of unique discovery. Vega’s damaged, mournful and beautiful performance is the heart and soul of this humble tale of a transexual woman who suddenly loses her partner.

After a private birthday celebration, Marina (Vega) and her partner Orlando (Francisco Reyes) retire to their apartment for the evening. But when Orlando wakes up feeling ill, the tragic circumstances that follow thrust Marina into crisis mode. Orlando’s abrupt death and suspicions surrounding how he died puts Marina in the crosshairs of an investigation. And because she is transsexual and Orlando is much older than she is, few investigating are willing to listen to her side of the story.

Guarding oneself is a recurring theme in “A Fantastic Woman.” The boxing imagery is part of the narrative’s overall defensive strategy. The script co-written by director Sebastián Lelio and screenwriter Gonzalo Maza entraps Marina in a changing and dangerous world. Her meek response to the ever-present threats may prove to be frustrating to those of us in the audience who want Marina to lash out. But even though she is fully capable of protecting herself, she’s constantly playing defense.

In one scene, Orlando’s sensitive older brother, Gabo (Luis Gnecco), arrives at the hospital. He knows who Marina is, and seems to understand his brother’s relationship with her. But despite the fact that Marina has been living with Orlando for some time, Gabo never met her. Their first physical encounter is telling, Gabo leans in to give her a hug but then instinctively pulls away. The two settle on a handshake. A person both of them loved has suddenly died, and all they can do is act formally to guard against any untoward appearances. It is the subtle offenses that frustrate Marina’s choices and her very existence.

As the story unfolds, Orlando’s family rejects Marina and her place in Orlando’s life. Because Marina is used to being treated this way, she plays a bit of the rope-a-dope, laying back while the punches are thrown at her. Her time will come when they run out of energy. Or will she not survive their destructive onslaught both emotional and then physical?

The surprising thing about “A Fantastic Woman” is what it is not. At times, I wondered if it would take a lurid turn like something from the dark and warped school of Brian De Palma. But instead of being concerned with plot twists and thriller elements, this film is interested in character and taking us on a very private journey. It’s a journey about protection and finding safety in one’s identity, but it is also about heartbreaking loss and mourning. No matter how hard she punches, something will always punch back. And Marina will have to keep her fists held high.