Reynolds brings Brolin in on the Deadpool joke for even bigger laughs. 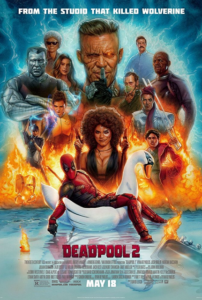 “Deadpool 2” loops back on itself to find a kind of rare profundity. I liked it, and I want to see it again.

When Wade Wilson aka Deadpool (the “ugly” Ryan Reynolds) loses someone close to him at the hands of ruthless armed killers, he sets out to get some old-fashioned revenge. “Time to make the chimichangas,” again.

As Deadpool plots his killing spree, the true blue-steel Colossus (voiced by Stefan Kapicic) desperately wants to channel that pain forcing him into the hero role. Of course, as we know, Deadpool is having none of it. And in time, he’ll assemble his own team of misfit mutants he calls X-Force. But a man from the future named Cable (Josh Brolin) will come a knocking, which causes all sorts of violent, destructive mayhem. To break the fourth wall Deadpool-style, that’s all the spoilers you’re gonna get.

“Deadpool 2” is funnier and more action-packed than its predecessor. Filled with unconventional kills, four-letter words, sexual references, and even more idiosyncratic kills that leave a high, but comedic, bodycount, fans will be thrilled.

And with the success of this film, Ryan Reynolds’ star will rise even higher. As demonstrated by his Twitter feed alone, he is clearly one of the most naturally funny human beings on the planet. There was a reason why his pairing with another actor with naturally funny charisma, Sandra Bullock, elevated the 2009 contrived romantic comedy “The Proposal” to minor hit status. Hint, hint, please give us some Bullock in “Deadpool 3.” Anyway, producers already know that if you need to give your derivative film a jolt, get Reynolds! Just look at the what he and Samuel L. Jackson did for last year’s mediocre “The Hitman’s Bodyguard.”

But “Deadpool’s” success for Reynolds was hard fought. After originally appearing as the strangely muted character in the overly somber, critical failure “X-Men Origins: Wolverine” back in 2009, Reynolds campaigned for years to be given a chance to star in his own standalone film. Finally, he got his wish and in 2016, as we all know, “Deadpool” made rated-R superhero history. The wise-cracking, rude, crude dude dressed all in red (for a reason) emerged with a literate and hugely entertaining origin story that I still can’t show my 14-year-old daughter.

Of course, a sequel was inevitable but proceeded without director Tim Miller, who successfully translated to the screen the bloody comic vibe that minted the character in cinematic superhero lore. Stepping in as the helmer for “Deadpool 2” is action expert David Leitch, who last year impressed with his period set actioner “Atomic Blonde.” Leitch knows action, and he displays a deft, inventive touch here. But Deadpool’s brand is a perfect Shish kebab of humor and brutal action. “Deadpool 2” is as funny as it is thrilling.

And, yet, while you might be laughing loads, there is a creeping sadness associated with the Wade Wilson/Deadpool persona. He’s a tragic hero. At one point, he says something like you have to die to live. And in this movie, he dies repeatedly. But then he grows back, which provides some of the biggest laughs in the film, but had me thinking a little deeper. Dying might not be all it’s cracked up to be. And Deadpool with all his jokey bravado knows it.

Roaming around in the etherial plane, Deadpool has a chance to see heaven, to, in a sense, touch the face of God. Okay, that’s a little too deep, but I think there’s great potential for exploring the Deadpool beneath the comedic exterior. At one point, he’s suffering horribly following a traumatic event and his solution to ease the pain is to die for a little while. Without considering the questions concerning suicide, the idea of being reborn again and again and again is a classic question that left me unsettled as the credits rolled. But I think my existential questions about Deadpool are truly important ones to turn over.

The other question raised here is the age-old time-travel conceit that seems embedded in any X-Men related project. Cable is on a mission to change the future by going into the past. But if you give that power to Deadpool, watch out!

New characters are introduced that are likely have some staying power. I won’t dare spoil the little comic gems scattered throughout the film, but Zazie Beetz really nails the lucky hero Domino. She brings a straight-up no-nonsense hipster groove to the character that is seriously cool. And despite also being simultaneously in theaters by also playing super-villain Thanos in the latest “Avengers” blockbuster, Brolin puts a somewhat more human stamp on Cable, making us forget Thanos until Deadpool quickly reminds us of the connection.

Impressive on almost every level, the bawdy “Deadpool 2” is great, big, naughty fun, but not, of course, for the whole family.