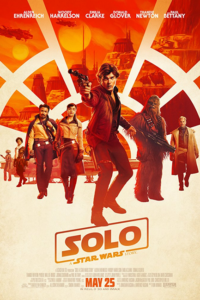 Saved by Donald Glover’s affected, but interesting, performance as the cape wearing Lando, “Solo: A Star Wars Story” is much better than the troubled production that spawned it.

When the original directors Phil Lord and Christopher Miller were essentially fired after filming a lot of “Solo,” fans were disheartened. After all, this was the directing duo responsible for the transcendent “The Lego Movie.” Hearts sank even more when it was announced that Hollywood veteran Ron Howard was brought in to replace the two hipster auteurs.

Howard isn’t necessarily known for this kind of material, and his work is more of a slice of Americana rather than a piece of pulpy, science fiction, space opera wonderment. But while Howard’s staid and sure hand is all over “Solo,” there are parts of the film that feel very much not Howard. And to be fair, a look at his filmography does reveal “Willow,” a fantasy adventure that I remember fondly. Note that Warwick Davis, one of the “Willow” stars does have a role in “Solo.”

What is clear though is that “Solo” did not benefit from having more than one master. And as is typical of all things Disney, unless the director has a very strong unified vision and attitude, any definitive signature or unique voice will get lost under the need to satisfy marketing requirements. For every “Thor: Ragnarok” there is a “Thor: The Dark World.”

But let me make it absolutely clear, Han Solo’s origin story isn’t a bad film, it just feels soft and definitely hints at the “Star Wars” universe future, one in which there are likely more porgs on the horizon. This potentially edgy story has a young Han (played by Alden Ehrenreich) escaping enslavement on one planet by joining the Empire. Of course, he washes out and becomes part of a ragtag team of robbers led by the mysterious Beckett (Woody Harrelson). And this is where Han quickly proves himself valuable as a crack pilot. Along the way, he gains the friendship of Chewbacca (Joonas Suotamo) and the flashy Lando Calrissian (Donald Glover).

The “Star Wars” mythology is laced throughout “Solo,” which effectively undercuts the film’s independence due to the need to connect it to the franchise. Unlike “Rogue One,” Han’s standalone story can’t shake the cutes that also marred “The Last Jedi.” What could have been a gritty space Western with bite becomes another watered down adventure installment that fails to distinguish itself enough to be truly memorable.

Still, there is a flash here and there of what made Han such an iconic cinematic creation. He tells us that he “has a good feeling about this;” he speaks a little Wookiee; and he’s altogether full of himself when he ought to be more cautious. If only these aspects of the character were more fun and carried with them a depth that revealed that the bravado hid inner scars.

Ehrenreich does his best to honor his predecessor while also bringing something new. Unfortunately, we learn virtually nothing about the child Han and why he is the cocky young man that he is. The script is like the middle section of the story, without a first act that reveals Han’s vulnerability. Compare the way the imperfect “Rogue One” began, and you might understand my point. We have little context. And the narrative jumps again when Han goes from volunteering for the Empire to fighting on the battlefield. Key interesting details about Han are missing.

But what does work is Donald Glover’s complete mimicry of Billy Dee Williams’ Lando. I say mimicry, because Glover is really putting it on here right down to the hand gestures and the vocal tones. It’s a little strange, but dog-gone-it, Glover makes it work. There’s also something very odd about Lando that we may have gotten a whiff of starting with “Star Wars Episode V: The Empire Strikes Back.”

Lando is a very deep guy—he gets you and that is his major talent. By the time we meet him in “Empire,” he’s already mastered his empathetic powers, and he’s used them to become somewhat powerful. Frankly, it might even be the Force coursing through his veins, I don’t know. But when Lando is on screen, you pay attention. He’s a huckster, but one who is honing his particular skills.

The look of “Solo” is consistent with the “Star Wars” brand. It’s very soft and filmic. But the early scenes of this movie are dirty and, at times, so ugly that images are difficult to differentiate. It’s certainly all intentional. But a word to the wise, don’t complain about the projection, because it isn’t likely the theater’s fault.

I liked enough of “Solo” to recommend it, but there’s not enough tension or anything that makes you feel as though something dark and dangerous was in play. Han is a character that is all about living on the edge, playing the risk/reward angles. And this film doesn’t take enough risks to be completely rewarding.