Thanos ponders the meaning of his existence in “Avengers: Infinity War.”

After ten years of cinematic development, “Avengers: Infinity War” brings the universe together to fight the tragic villain Thanos. And what might have been a messy team-up experiment is remarkably cohesive and eminently satisfying. 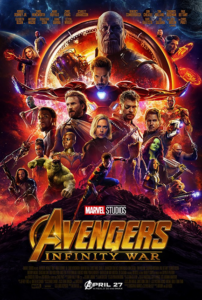 It’s hard to overstate what’s at stake for Marvel and Disney with the release of “Infinity War.” As shown earlier this year with the surprisingly effective, box office juggernaut “Black Panther,” the comic book formula is now a well-oiled movie machine. And unlike the Warner Bros./DC problems that have been miss more than hit, the Marvel/Disney pairing has been a consistent franchise with each film managing to contribute meaningfully to the one that comes out thereafter.

But what if Marvel missteps? What if that moment of wrong-footing occurred with the most expensive entry of the entire series? Reports are that “Infinity War” and the next “Avengers” entry (combining to form a two-part epic) have run up a collective budget topping $1 billion dollars. This is not where Marvel needs to stumble.

So, in order to find sure-footing, the studio turned to the brother team of Anthony and Joe Russo, who were responsible for the fantastic “Captain America: Civil War.” It was that film that rivaled the “Avengers” movies in scope by bringing together Steve Rogers with Tony Stark, introducing a new Spider-Man and populating the adventure with a host of other Avengers. “Civil War’s” final showdown was really poignant, making it hard to believe that the Russo team could repeat the magic. After all, just ask Joss Whedon, who had a tough time equaling, let alone topping the success of the the first “Avengers” film with “Age of Ultron.”

Thankfully, instead of trying to repeat the narrative notes that served the Russos’ well with “Civil War,” they understandably go wider with “Infinity War.” This means that while the universe hangs in the balance in “Infinity War,” the script doesn’t weigh down the narrative with heavily emotional personal conflict. Sure, there is a level of pathos that connects here, but “Infinity War” is just a broader and frankly funnier movie than “Civil War.” Both pictures have an epic reach, but “Infinity War” is a true “Avengers” movie with all the trimmings.

And much of the “Infinity War” success is mainly due to the magnificent creation of anti-villain Thanos (a CGI Josh Brolin), who is so conflicted that it’s hard to really hate the guy. He’s a more interesting and fully developed bad guy than most any in Marvel history. While he’s big and strong and positively invincible, he’s constantly deciding, calculating how far he has to go to get exactly what he wants. Killing is necessary, but not something he takes great joy in doing.

The story revolves around Thanos’ quest to hold all the infinity stones so that he alone can wield infinite power. The reason why this is his life-long mission is part of the somewhat profound mystery of the film, which I dare not reveal. And when we initially meet him, he’s already well on his way to capturing all the stones. Those stones that remain include but are not limited to one thought to be in the possession of Thor’s people and two on planet Earth.

On Earth, one of the infinity stones is hanging around Dr. Strange’s neck. Remember Strange (Benedict Cumberbatch) used the stone to fight off an invading force in his stand-alone film. The other stone on Earth is embedded in the head of the Vision (Paul Bettany). And students of the franchise well know that Vision was once an aware computer created by Tony Stark. It was in the “Age of Ultron” that Vision escaped the computer and found a form much like that of a human being. The infinity stone fused into him helped make that possible.

Therefore, Thanos is on a collision course for our blue planet. And the only ones that can stop him are the Avengers. Well, the Avengers and every other superhero available. The story takes place both on Earth and in outer space. It picks up where both “Thor: Ragnarok” and “Black Panther” left off. And the interstellar traversing is pretty dizzying.

Did I mention that the Guardians of the Galaxy show up? Well, that’s been teased in the trailers. Much of the joy of this enormous mashup is in spotting all the familiar heroes as they make their contribution.

There is really something for everyone in “Avengers: Infinity War.” Thematically, the concept of good vs. evil is in play, but the very nature of evil is an ultimate question dealt with somewhat clumsily. The pace of the film is so frantic and driven that hardly any time is left for a bit of calm and reason. Still, the complex handling of the effects of the accumulation of absolute power are embodied well in the tragic character of Thanos. His place in the MCU is so immense that two movies may not be enough to cover it all.

Notice that I’ve been intentionally vague and lacking in details here. Spoiling the film would do fans a disservice. It is enough to say that no one is safe when they stand in Thanos’ way. More than a one-man wrecking crew, his goal alone is that of a destroyer of the universe, and he damn well makes you believe it.

“Avengers: Infinity War” is a successful tuneup for a tumultuous, significant chapter in the continuing Marvel Cinematic Universe that will alter the trajectory of the franchise as it enters its second decade. And the stakes for Marvel and Disney continue to be ever higher.