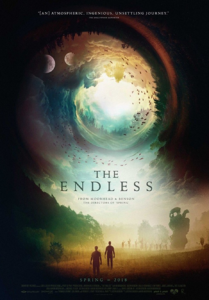 Shades of “Primer” are definitely present in “The Endless,” a modestly budgeted, time-loop science fiction thriller that effectively mixes science and fantasy.

When brothers Justin (Justin Benson) and Aaron (Aaron Moorhead) decide to return to visit a mysterious cult they once escaped from, they begin to question why they left in the first place. Older, controlling sibling Aaron is convinced that the strange group is something dangerous and evil, but the more naive Justin isn’t so sure. Immediately upon arrival at the cult’s isolated compound, things are obviously amiss. The members appear to have not aged in years, and they welcome the brothers with open arms.

As Aaron investigates, he learns things that confuse him. Apparently, the commune isn’t the only group of that occupies the remote desert location. And a sinister presence can be felt everywhere.

A slow simmering mystery, “The Endless” smartly develops its characters building up the science fiction/horror elements in a thoroughly interesting manner. Interesting may not be the same thing as entertaining, however, and for some viewers, this film will frustrate, confound, and even bore them. That is, of course, the intention here. Just as writer/director Shane Carruth demonstrated with 2004’s critical hit “Primer” and his marvelous 2013 followup “Upstream Color,” there is a market for this kind of intelligent science fiction that blends subtle special effects and techie dialogue to raise provocative questions.

While “The Endless” is no “Upstream Color,” it will certainly charm the same category of viewers hungry to geek on classic science fiction questions. The movie will appeal to the audience that rallied around the Brit Marling/Mike Cahill film “Another Earth.” Slow and thoughtful science fiction is critical to help balance out space operas like this weekend’s somewhat shallow (certainly by comparison) “Star Wars” installment (see my “Solo” review).

One thing is clear, smart, complex writing can be its own special effect. Films like Nacho Vigalondo’s fascinating and thrilling 2007 film “Timecrimes” shows us that an audience can be genuinely provoked and engaged without big budget special effects. And the filmmaking duo of Benson and Moorhead can add their names to the list of directors determined to elevate the genre.